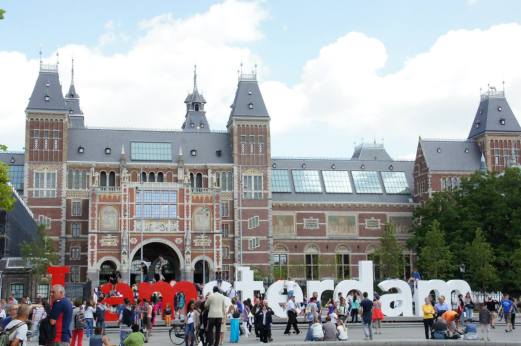 I didn’t think I was going to like Amsterdam that much when I was planning my first European trip, but it became one of my favorite destinations.  I like to describe Amsterdam as a live oxymoron.  One side has that calm, conventional, family friendly atmosphere while the other side has that busy, exhausting vibe which is apparent in their red light district.  Beware!  Some pics may not be suitable for kids hehe.


Touristy Stuff:
– IAMSTERDAM: The infamous place to have a photo-op in Amsterdam.  It is in front of the Rijksmuseum.  Beware of the crowd.  It may look nice in photos, but believe me, you will be battling for a picture spot.
– Anne Frank House: This was a humbling experience for me.  It made me thoroughly understand how Anne Frank along with her family and friends of the family lived in hiding.  I thought the way they arranged things inside of the house was kind of cool.  I suggest purchasing tickets online if you don’t want to wait for a long time to get in.  Click here to purchase ticket(s).
– Van Gogh Museum: It is home to a great collection of Van Gogh art.  The Van Gogh museum also chronicles Van Gogh’s evolution as an artist.  I also purchased my ticket ahead of time to avoid the lines.  Click here for tickets.

Touristy stuff cont’d..
– Vondelpark: This is one of the first urban parks I’ve been to.  The park is about 47 hectares.  It’s a tranquil park sometimes offering free concerts at their open air  theatre.
– Heineken Experience: An interactive experience where you’ll learn about Heineken beer’s history plus process of making beer. You’ll also get a free glass of beer or two at the end of the tour.  I bought the tickets with a canal tour on viator if you are interested.  The canal tour is a good way to learn Amsterdam’s history.
–De Wallen: The best known Amsterdam red light district.  There are a lot of cannabis stores as well as sex related shops and theaters.  Prostitution isn’t much of a taboo so you’d find a lot of brothels parading girls by their window.  We were warned not to take photos of the girls since they probably have decent jobs or attending school and they are just looking to earn some quick cash.  I took some shots anyway hehe.


Local Food:
Herring Broodjes – Raw herring on a bun served with pickles and onions.  I’m very experimental with my food so this didn’t bother me at all.  I’ve seen advertisements where people eat raw herring by itself.  If they have hoagie stands in NYC, Amsterdam has raw herring stands prevalent all over the city.
Stroopwafel – It’s 2 waffle-like wafer stuck together with sweet syrup in the middle.  I asked a salesperson at a local grocery store what’s a good souvenir to take back home and he suggested stroopwafel.  I am in love with it!  I must’ve eaten the whole bag in one sitting.  It is recommended to heat this dessert up to get the most of it.
Gouda Cheese – I had my first Gouda experience in Amsterdam.  There’s a Gouda cheese shop close to the Anne Frank house where we sampled different types of Gouda.  The aged gouda cheese was sharp while the young gouda was soft like butter.
Coffee and Appeltaart(Aplle pie) – There are a bunch of coffee shops in Amsterdam so you’re in luck if you’re a coffee drinker.  The Dutch are also known for their apple pies (Yum!).  So, we checked out this cafe called Cafe De Prins which is also close to the Anne Frank House.  I highly recommend it!


The Dutch are very friendly people.  A lot of them were willing to help which made getting around super easy.  I remember initially having a hard time with the train system, but a few people helped out.  I wish we had more time to explore Amsterdam.  I wanted to go back again for my 2nd European trip but it just didn’t fit our schedule.  I truly enjoyed my time there.  For those of you who has been to Amsterdam, please share your favorite experience 🙂